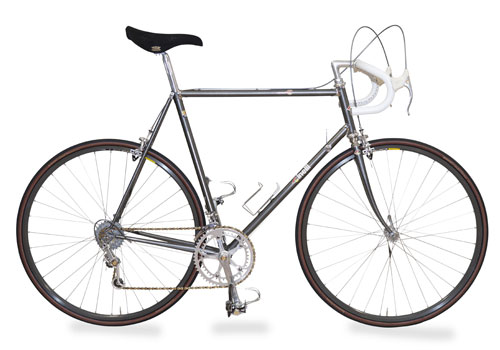 Cino Cinelli founded his cycling manufacture already in 1948. After he was a professional cyclist from 1937 to 1944 and won the Giro di Lombardi and the Tour des Apeninns, he wanted to implement his own technical ideas and upgrades, which he developed during his time as a pro.

In 1947 Ole Ritter broke his own hour record on a Super Corsa Frame, which traces back to a Cinelli concept of 1947.

The sporting task consisted of tracking down a Supercorsa from the early 80s with a frame height of 60cm. We were able to find one in Great Britain! The rare frame was restored and constructed once again. That means the old varnish was removed, the original labels were reconstructed and afterwards the frame was lackered.

The edle frame was equipped with the beautiful Campagnolo Super Record Group and parts of 1984. All parts are in the very best condition. Of course all fats, features and feature husks were renewed. The tires are also new. Supercorsa – a beautiful classic with its chromed muffs and the unique seat clamp „State of the art“ which represents the 80s.