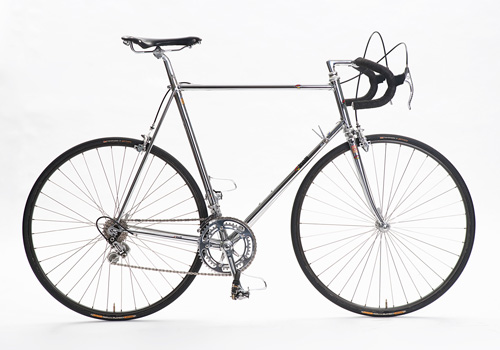 Yet, in 1948 Cino Cinelli founded his own bicycle manufacture. After having won Milan San Remo, the Giro di Lombardia and the Tour of the Apennin as a professional cyclist between 1937 and 1944, he wanted to convert his own technical ideas and improvements he had developed during his professional career.

Cinelli did not build more than 700 frames. In 1974, Ole Ritter broke his own hour record on a Super Corsa frame, which traces back to a Cinelli concept of 1947.

This Cinelli Supercorsa frame is held in a very, very rare chrome, which means it wasn’t overlacquered. That gives the frame a little less weight and a beautiful surface. According to our inquiries the frame by Cinelli was built exclusively for the racing cycle team Berma. The frame arised in the early 1980s and is equipped with extra fine Campagnolo Super Record and Record components out of this era. Most of them were highly polished. Of course, all of the greases, Bowden cables and Bowden cable capsules (Jagwire) were replaced completely. Also the rims were replaced entirely. A High-End classic, which is completely chromed, and in its as good as new condition a real rareness.