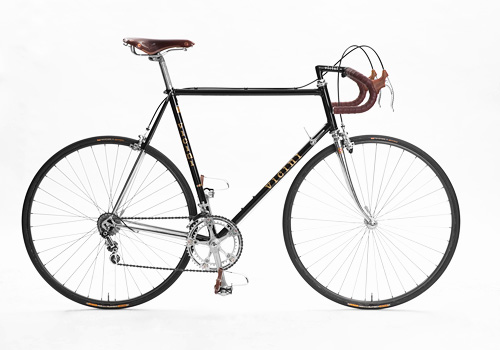 Mario Vicini was a professional racing cyclist, heading from Cesana, Italy. In addition to many wins and titles, he won the Italian Championship in 1939 and 1940, the Giro del Lazio and the Giro di Toscana. Participating in the Tour de France, he finished second in 1937 and sixth in 1938. At the Giro d’Italia in 1940, he won three stages and finally finished third.

Vicini racing cycles were very popular in the 1980s. Especially in the south of Germany, the dreams of many racing cycle enthusiasts became true – with such a Vicini racing machine. The top models were made of the best Columbus steel tubes and were equipped with very valuable components of the Campagnolo Super Record Group.

This Vicini Columbus SL racing cycle comes from 1984 and was actively driven in several youth races only a couple of years ago. Having endured 20 years of cellar air, it then was able to get sight of the street lights again. Of course, it was elaborately restored. Like almost every DaCorsa project, the Vicini was sandblasted, powder-coated and – after having reconstructed the original labels – varnished.

Every component is in its very best condition. A dark brown Brooks swift saddle plus the matching Brooks leather bar tape underline the precious racing cycle’s classy charme. The highlights are the pantographed; thus engraved and detached in terms of colour components of the Campagnolo Group; such as the chain wheel, the seatpost and the stem. A high-end racer from the 80s whose classy charme is hardly to surpass.