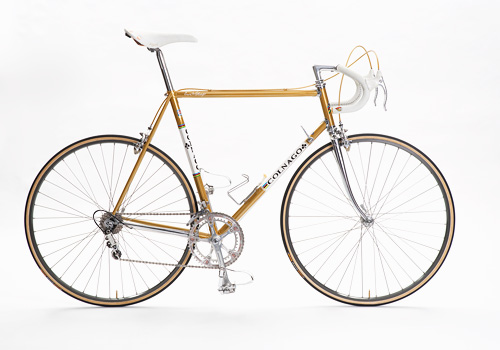 Since the olypmpic gold in Rome 1960, Colnago frames definitely belong to the world’s best road race frames. In 1972, the very light steel frame was built by Ernesto Colnago. It was ridden by Eddy Marckx in 1972, who set the world record for hour driving. In 1982, Colnago produced the Columbus steel Master frame. It was ridden by Giuseppe Saronni, who became road race world champion. Exactly one of those Colnago Masters was rebuilt affectionately by DaCorsa. The frame was sandblasted and checked for minutest damage. It was powder-coated in yellow-gold, equipped with true to originally reconstituted labels and was finally high gloss transparently varnished. The bushing is recessed in chrome, which is typical fort he Colnago Master frames ever since. The obstructed components are throughout NOS (New Old Stock) and valuably restored Campagnolo Super Record or Record original components of the early 1980’s. All of them were engraved and coloured by hand. The special highlights are the pantographic Ernesto Colnago winder, the pantographic and highly polished Campagnolo Record seatpost and the Cinelli Criterium handlebar including a suitable stem, upholstered with withe suede. All of the components are in the very best condition. Of course, all greases were replaced, same goes for the tires. A High-End classic, which displays a real rarity in its true to original and its as good as new condition.