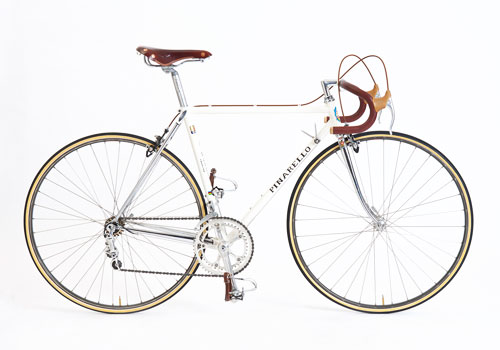 What do Pedro Delgado, Miguel Indurain, Bjarne Riis, Jan Ullrich and Oscar Pereiro have in common? They all won the Tour de France between 1988 and 2006 on a Pinarello bike. Indurain even 5 times in a row. The first bike was produced in 1952. Back then Giovanni Pinarello received the order to develop a racer for the Italian cyclist Pasquale Fornara, who has won the Tour de Suisse 4 times among others. A brand with an international originated upon this order. Over the years a lot of success was achieved on Pinarello racing cycles. Besides the Tour overall wins, the German cyclist Eric Zabel, who used a Piniella cycle, won the green jersey 4 times.  Also 2 Olympic gold medals in Los Angeles and Sydney belong to the success story of the frame manufacturer from Treviso.

DaCorsa 80’s restored this Piniella Columbus frame of the early 80s carefully after it was sandblasted and powder-coated to shine in new white splendor. The original labels were redesigned lavishly and varnished below clear lacquer.

Furnished with top equipment from this period, a flawless Campagnolo Super Record group and a Pinarello logo, a seat post with pantographs plus a San Marco smooth black leather saddle, this Piniella bike is exceptionell  master piece sought by collectors all over the world. Of course all of the fats, features, shift cables and tires are new.