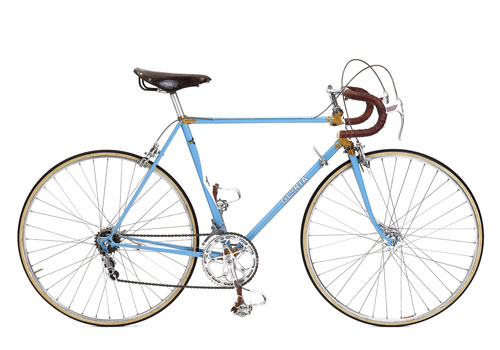 Gloria – Glory came along with the history of the brand, which was founded in 1922 by Alfredo Forcesi and Francesco Galmozzi in Milan, Italy. Just one year later, in 1923, the young racer Libero Ferrario became world champion of amateurs on a Gloria bike. In 1938 Francesco Camusso from the Piedmont won the prestigious Giro d’Italia. Other famous riders on Gloria were Constante Giradengo and Learco Guerra.

But Gloria was known not only to equip the world’s best drivers and teams with top bikes. Alfredo Forcesi also had an intuition for young talents. A blaze of glory irradiated on a whole generation of posterior famous frame and bike constructors. Ernesto Colnago, Cino Cinelli and Faliero Masi learned the trade from Alfredo Forcesi. His partner Francesco Galmozzi founded his own just as legendary label in 1935.

DaCorsa was able to get hold of one of those rare Gloria Milano frames from the 1940s. The Luxe titanium stem and the M. Kint handlebar are very special. This bike is also re-equipped with contemporary parts of the Campagnolo group and impresses with its aesthetic look. Take a look on the hand painted muffles and all the filigree details of the gear change, the brakes and the jag wires, which were replaced after the bike has been sandblasted and powder coated.